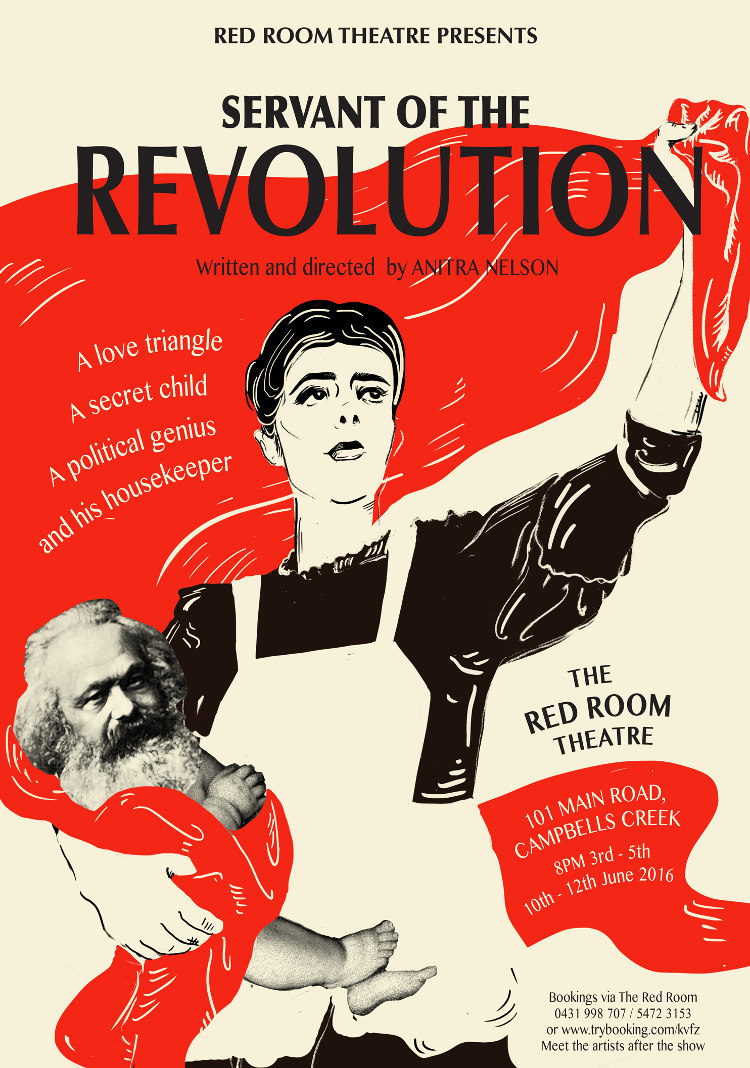 Servant of the Revolution highlights the point of view of a strong, intelligent and pragmatic protagonist, Lenchen, to reveal hard and soft gender power plays, an omnipotent patriarchal social structure, a constant dynamism between a challenging reality and the hope of both socialist and feminist ideals, a tale of sturdy rebellion and resistance.

In 2016 the Red Room Theatre (Central Victoria) performed the play to packed houses and more publicity.

In 2017, the play has been translated into German and a rehearsed play-reading will take place on 6 December on the eve of the Historical Materialism Australasia conference, 7–8 December, at University of Sydney.

The initial writing of the play benefitted from an Australia Council funded Melbourne Writers’ Theatre mentorship with Sandra Shotlander and a public reading at Carlton Courthouse Theatre (both 2000) and a public rehearsed play reading in the Playbox ‘theatre in the raw’ series at Malthouse (2002).

Servant of the Revolution presents and analyses, in a concentrated, real time situation, the cross-currents of lofty idealism vs. cruel pragmatism and enduring love vs. enduring duty. These forces swirl about and trap Lenchen, the faithful servant of the Marx family and the mother of Karl Marx’s illegitimate son.

Cunningly, Anitra Nelson puts Engels, not Marx, on stage as go-between and manipulative fixer when Lenchen wants to see and know her boy, long since fostered out and now a man. Engels, the prophet of revolution and freedom, pleads

Victorian respectability to prevent her. He plays on the servant’s own devotion to the cause and on her indestructible love for her master, Marx.

At the end, a cheery Mrs Marx — who knows, but chooses not to know — returns home and Lenchen is where she began: the faithful servant, who will serve to the end. Her yearning can’t break through and she can’t break out.

An ironic slice of imagined biography, based on known facts, about how revolutionaries can exploit the proletariat, and are human, all-too-human, too.

The major impression after watching Servant of the Revolution is that one has been given a unique and disturbing glimpse into the specific circumstances and personal conduct of Karl Marx and his family.

The domestic arrangements and the personal/class relationships portrayed in the play appear detailed and authentic. The central dialogue between Engels and

Helene Demuth is lively, compelling and unsettling. Every character has an individual voice and manner. By placing the action in the kitchen, the author is able to sharpen and foreground the awkward, confronting class tensions. That Marx himself doesn’t appear and others are left to pick through the consequences of his actions, creates tension and a degree of justified anger in the spectator. His absence and that of the unacknowledged son, has a potent theatrical effect.

All in all, Servant of the Revolution reveals a formidable level of research and a commitment to the complexity and truth of a potentially tragic situation. It provokes consideration about issues of class, gender and politics that remain largely unresolved and unacknowledged today.

A Nelson (2010) ‘Servant of the Revolution: The creative art of serving history and the imagination’ Hecate: An Interdisciplinary Journal of Women’s Liberation 36(1 & 2): 137–52.